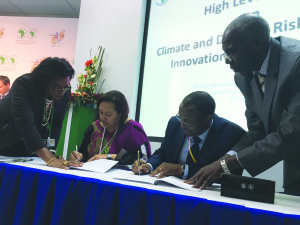 The ARC signed a Letter of Intent and a Memorandum of Understanding with the AfDB and the Conférence Inter-Africainedes Marchésd’Assurance (CIMA) respectively after a high-level panel at the AfDB’s annual meetings.

The Letter of Intent between the ARC and the AfDB marked an announcement of their intention to collaborate in the areas of planning, preparation and response to extreme weather events and natural disasters for the benefit of the Regional Member Countries (RMCs) of the AfDB.

The collaboration is expected to play a pivotal role in protecting investments for economic growth, especially in key economic areas vulnerable to weather shocks such as agriculture. The Letter of Intent will support the introduction and mainstreaming of disaster risk financing into national fiscal policy in member states.

Mohamed Beavogui, Director General of ARC Agency, said: “This signing between ARC and AfDB reinforces and formalizes an already strong partnership between both institutions and demonstrates the foresight and leadership of the Bank in coordinating our efforts towards addressing the needs of our Member States.”