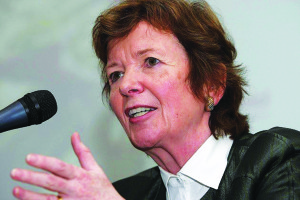 Robinson, the new UN Special Envoy on El Niño and Climate, told participants at a seminar on ‘Climate Change-Beating the Odds’ at the Annual Meetings of the AfDB that the injustice of climate change in Africa “is compounded by the fact that western countries have done their developments on fossil fuels and are now telling African countries and other developing countries not to utilize their fossil fuels energy”.

“What is important is that African people should not suffer this injustice again,” she adds.

According to her, with more extreme weather events expected in the future, and the poorest communities who are least responsible for climate change primed to be hit first and hardest, a longer term approach is required to build the resilience of the most vulnerable.

She expressed belief that massive investment in renewable energy and off-grid power system can help Africa successfully beat the odds of transitioning to cleaner and efficient energy. “Africa has done it with the leapfrog on the mobile technology on mobile phones. Renewable energies are becoming so much cheaper and we have battery retention and off-grid power sources that can easily reach the many poorest,” she says.