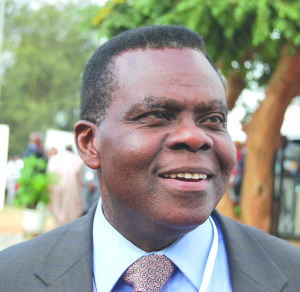 Dr Bright E. Okogwu is the Executive Director of the African Development Bank (AfDB) representing Nigeria and Sao Tome & Principe. In this interview with AnnualMeetings Daily, Okogwu, who had served as Director- General of Budget Office in Nigeria before joining the AfDB, bares his mind on the prospects of the Bank’s vision for Africa’s transformation encapsulated in the High 5s.

How far can the AfDB’s High 5s go in addressing Africa’s development challenges?
The African Development Bank’s (AfDB) High 5s is revolutionary in a sense because it prioritizes the critical issues that bedevil this continent such as power, nutrition and food security, integration, industrialization and improvement of the wellbeing and welfare of Africans. These are critical issues and I am quite excited about the High 5s because the agenda has been drilled down significantly to ensure that the Bank delivers on each of the priority areas. It is not just talking about the concept. They have been developed to a very large extent in a great detail. The focus now is to complete the programme and get countries to start implementing them religiously, which is the agenda of the Lusaka Meetings. Interestingly, all countries are in attendance, including many heads of states. The good news is that everybody has reviewed the High 5s agenda and bought into the idea that it would be a galvanizing point towards developing the continent.

What kind of action are you expecting from countries in your constituency to ensure that they tap into this agenda?
I am glad that a country like Nigeria was very well represented at the Lusaka meetings, with the Vice President of Nigeria, His Excellency, Professor Yemi Osinbajo making a grand appearance here. And Professor Osinbajo mentioned programmes and projects already initiated by the Nigerian government which are in line with the Bank’s new agenda, which includes the unbundling of the previously state-owned public electricity utility. That is a major step in the right direction that the government has initiated. Osinbajo also mentioned new investments in things like gas infrastructure which are needed to power the electricity generation stations. The essence of this is that people are beginning to recognize what is needed in their various countries to address developmental challenges. I give you another example: coal is one of the elements within Nigeria’s energy mix, although we have not used it for too long. So, what Osinbajo said which I love is that the government is pursuing the energy mix. Nigeria is a large country with variable renewable energy sources like sunshine, wind, water etc. We hope that when these programmes are implemented, the countries will move forward.

The African Economic Outlook does not give much hope for member countries. Are you worried that this may impact negatively on the High 5s agenda?
I can tell you with confidence that the economic outlook for Africa is not bad. As we have seen in the various presentations, we do have a lot of African countries that are among the fastest-growing economies in the world. The reason for the current sluggish growth across Africa is because the world is going through a downturn. But, even within the context of sluggish global economy, African countries have already proven to be very resilient. That really is the message from the Lusaka meetings.

We all know the main reason why most African countries are experiencing difficulties and that is because of decline in prices of primary commodities, especially oil and metals. Those things have raised big questions about how we grow the economy. However, despite the very low commodity prices, we have seen a situation where many African countries are actually still growing. That shows the level of diversification away from primary commodities and the reform from the macroeconomic side that has taken place across the continent. So, you will see that by the time those countries come out of this commodity super cycle, we are likely to see their economies pick up again. I am optimistic that the High 5s agenda will prosper and bear desired fruits.