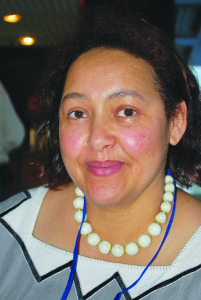 Dr Frannie Leautier, the new AfDB Senior Vice President, has been around and about in Africa’s development space. On leaving her post as Vice President at the World Bank, the Tanzanian national headed the African Capacity Building Foundation (ACBF) before going to run Mkopa Private Equity Fund, which she co-founded.  Hereunder are excerpts of her take on various trending development issues:

What is your take on your position and where theBank is going at this very moment?
I agreed to come to the Bank because this is a very exciting time for Africa. We have a number of challenges ahead but we have a lot of opportunities, optimism and expectations. I think that makes for a good start but  I am coming at a time when the AfDB has a President who has laid out a vision that has been very well-received within and outside Africa.

The Bank looks at the whole continent from both the finance and the advisory points of view and that jells with the different experiences that I have had working internationally at the World Bank and in capacity development and in the private sector.

How do we deliver on the expectation of the people?
We would be signing, with the president, a performance contract that puts achievement of results front and centre. So, we deal with how to scale that into the organisation so that we continue to build a performance culture, a culture of excellent implementation of results and speed.
The third component is the way we innovate and bring new ideas so that the ideas that staff have come up with the ‘Innovative Pitch’ which was launched within the Bank can find their way into implementation.

Lastly, one of the key challenges that we face relates to the performance of our portfolio. We want to make sure that our mechanism for approval, implementation and supervision are improved so as to focus on a timeline.

The President has announced that we are going to be decentralising and moving our key operational staff to the countries. This will allow us to be closer to the countries and work with the key institutions and decision-makers at both the policy and political levels.

What are you going to do to ensure the President’s vision does not lose momentum as happened in the past?
First of all, by making sure that the excitement generated at the high level seminars and panels, and by heads of state that have come in large numbers to this meeting translate to action back in Abidjan and in the countries we work with and not just trapped in Lusaka.

The second is to make sure we can string along quick wins. For example, we have signed a number of letters of intent and MoU to take the issue of drought that Africa is facing serious. A number of countries including Zambia and Ethiopia are going though severe drought. We have signed the African Risk Capacity where the AfDB will partner to make sure that member countries that have drought risk can make premium payment into this insurance pool. Last year, Senegal was able to draw down $17million that allowed them to deal with drought. Mauritania did the same thing, so did Cote d’Ivoire.

The third is partnerships that work. We have here a number of companies that are interested in working with the AfDB whether it is on computational skill with companies like Intel; bringing internships; or working with foundations like the Dangote Foundation and using that opportunity to really push youth unemployment. Because if we can show that it can be done, then we can start making headway on the 25 million jobs we need to create in 10 years’ time.

How do you rate alignment between human resources and institutional capacity at the AfDB?
The new idea is the performance contract and culture where people will be selected on the basis of merit and rewarded on the basis of performance. That transformation in culture will be very motivating to staff who work hard to deliver result and it will also attract people into the bank who are interested in functioning under that kind of system.

The second is making sure that people who come with skills from different spheres from other organisations can be paired up with those who have been around for some time so that experience can be paired with new ideas and innovation.

The third is to bring in mentorship and apprenticeship from within the Bank itself so that we can speed up the process of transporting good ideas across the organisation. And then, of course, capacity building in its purest form means fixing institutional aspects and policy aspects and that means the Bank’s system for procurement, approvals and safeguards so that all are functioning efficiently.

How optimistic are you about the present leadership of the Bank?
When you look at the responses and reactions to the vision for Africa the president has sketched, it has been celebrated; and that is an indication of the quality of leadership at the top.

We came to the Board of Governors meeting in seven months with results that in previous times had taken the Bank two years to deliver. That means the staff have been working very hard but so has the board, because they had to approve all of these things. We had the energy strategy approved as well as the business delivery model. Very soon the decentralisation strategy will go for approval. These are big transformational pieces and they have moved very quickly.

Of course, it is not going to be easy; transformation rarely is. It is going to be continued hard work. As the president has said, Africa cannot afford not to be ambitious. That means we have to put in place the system, the process, the behaviour, the culture, the products and the financing that are needed for us to get where we want to be.