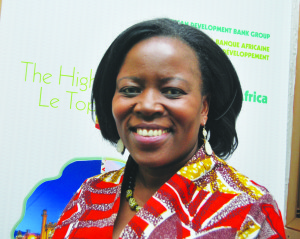 Dr Sipho Moyo, Director of the Cabinet and Chief of Staff in the Office of the President, boasts extensive experience in development and solid understanding of multilateral financial institutions.

Until her appointment last year as the Director of the Cabinet and Chief of Staff in the Office of the President, she worked as the Executive Director of the ONE Campaign, an international civil society organization.  Before joining the ONE Campaign, Dr Moyo, a Zimbabwean national, worked at the African Development Bank (AfDB) for 12 years —1998 to 2010 — where she functioned as Resident Representative and Country Manager for Nigeria and Tanzania country offices, Principal Country Economist and Senior Economist.

A purebred professional, she was Economist and Financial Analyst of the International Fund for Agricultural Development (IFAD), Rome, and at the World Bank between 1992 and 1994.

In this exclusive interview, Dr Moyo, a global citizen who has lived in 10 countries on three continents and has travelled to over 78 countries, shares her thoughts on this year’s annual meetings of the AfDB. Excerpts:

What are your thoughts as the annual meetings come to an end?
Indeed, we’ve come to the end of an exciting week with the Bank holding its Annual Meetings in Lusaka, Zambia.  It’s been particularly special for me given that I grew up in Zambia and when I graduated from the University of Zambia, the ceremony was held right here in Mulungushi Conference Center. I’ve been taking it all in starting with that magical moment during the opening ceremony that brought many adults to tears when President Adesina invited Kevin Doe, the 14-year old inventor from Sierra Leone to shake hands with the Heads of state on the stage.

This being President Adesina’s first annual meetings, there’s been a special buzz in the air with the High 5s which define his vision for Africa and the Bank’s strategic focus toward implementing its 10-year strategy.  In many ways, the Bank’s High 5s have become everyone’s High 5s just because they are so relatable. It’s been very exciting to see how the Heads of State and the Governors of the Bank that attended the 2016 annual meetings have rallied around this transformation agenda to: 1. Light up and power Africa; 2. Feed Africa; 3. Industrialize Africa; 4. Integrate Africa;  and 5. Improve the quality of life of Africans.

As you know, the theme of this year’s Annual Meetings has been “Energy and Climate Change” and it turns out that it struck a chord because the one High 5 that consistently floated to the top in discussions with leaders and participants alike was “Light up and Power Africa!” This is not by accident as most people understand that energy is the catalyst for achieving all other high 5s.

One thing that’s been on full showcase this week is the Bank’s convening power and more crucially, the resonance of our High 5s with anyone who cares about unleashing the full potential of the African continent. There’s only one way to do that and it entails investing in the key elements that will lead to durable, inclusive socio-economic transformation that leaves no one behind —such as investing in entrepreneurial skills and creating jobs for women and youth – that’s a good place to start!

If you walked around the complex as I’m sure you did, you’d have stumbled into a number of exciting events and “the Jobs for African Youths: From Demographic Dividend to Economic Dividend” was one such sessions. It speaks directly to the fifth High 5 on improving the lives of Africans. To this end, the Bank’s Board of Directors has recently approved the Jobs for Youth in Africa Strategy that aims to create 25 million jobs for the youth and reach 50 million others across sectors with Agriculture being the key one. Another exciting initiative in this context is the President’s Affirmative Finance Action for Women in Africa (AFAWA), a financing facility for women entrepreneurs which addresses the gender agenda with respect to women’s economic empowerment.

Another very exciting event in keeping with the theme of the week was “Africa’s Energy: What is the New Deal?” session. Suffice it to say 621 million Africans across the continent have no access to energy and are literally “scavenging” for energy as the President so aptly puts it. Over 600,000 women and children die every year from smoke inhalation or lack of proper cooking energy.  If this doesn’t shout “emergency”, then I’m not sure what does. The good news is there is a palpable, if not a renewed sense, of urgency and possibility all at once, among African leaders, private sector and those on behalf of whom we are gathered here, that these problems can be solved in our lifetime. And we at the African Development Bank under the leadership of President Adesina are determined to do our part while partnering with others to achieve it.
Let me also add that power and energy are critical for young entrepreneurs to get a head start.

As we head back to Abidjan, a lot of things are in place to begin to implement some of the high 5s. Key among these is the recently Board-approved BDM — Business delivery model —which outlines the Bank’s new structure that’s tailored for purpose. We are positioning ourselves to deliver for our people and the President has begun to put in place the necessary leadership to match. You would already have bumped into Dr Frannie Leautier, our brand new Senior VP and Chief Operating Officer and Dr Alberic Kacou, our equally brand new VP in charge of human resources and corporate services. Brand new but seasoned hands in the business of managing complex institutional reforms.

It’s an exciting time to be in the Bank. AfDB is truly repositioning itself for a performance culture where all staff will have to sign a performance compact against which they will be held accountable to deliver on.