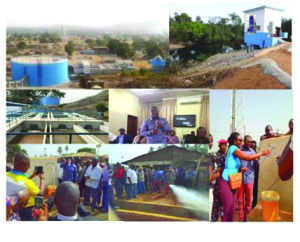 Sierra Leone has made considerable progress in consolidating peace and economic recovery. The country continues to take decisive steps to exit fragility and to build a more transformative and resilient economy with impressive economic growth peaking at 20.1% in 2013. Unfortunately, Sierra Leone’s economic growth was disrupted by the twin-shocks: the unprecedented decline in international iron ore prices starting in late 2013; and the outbreak of Ebola Virus Disease (EVD) in 2014 which led to the contraction of the economy by 21.5% in 2015.

However, the Government of Sierra Leone in collaboration with the Development Partners has developed a Post-Ebola Strategy (2015-2017) which aims to build a foundation for a more resilient Sierra Leone that will be better prepared to face future shocks and epidemics as well as refocus the Sierra Leone Agenda for Prosperity 2013-2018 (PRSP III). Through its ongoing and pipeline of operations (2017-2020), the Bank Group’s supports the key pillars of the national strategies in line with the current CSP 2013-2017 which include: 1) Increasing Energy access, 2) Improving access to safe drinking water and sanitation facilities, 3) Restoring growth through the private sector and agriculture, 3) supporting social protection and livelihood activities; and 5) restoring basic access to healthcare. The current CSP is aligned with the Bank’s TYS and other elements of the Bank’s evolving corporate strategy.

The Bank has supported Sierra Leone in its journey of recovery, helping to rebuild state institutions, restore basic services and promote growth and employment. Overall, AfDB has contributed about $403 million in grants and concessional lending between 2005 and 2015. When the Ebola struck in May 2014, the Bank responded quickly the crisis, providing $60 million as part of a wider regional package of $223 million. The Bank also leveraged about $ 3 million from unspent resources from completed projects to respond to the emergency.

The Bank’s support to Sierra Leone falls within the framework of the 2011 New Deal for Engagement in Fragile States (the Busan Agreement) and the Bank’s Strategy for Addressing Fragility and Building Resilience in its regional member countries (2014–2019). The Bank’s financing strategy promotes the use of available resources to leverage and prioritize regional funding, co-financing with traditional and non-traditional donors, and public-private partnerships in a catalytic manner. The Bank is amongst the leading development partners in financing infrastructure development and also in helping the country improve its Public Financial Management (PFM).

The AfDB has been supporting the Government in providing access to clean and safe drinking water and also proper sanitation facilities. To-date the total Bank Group assistance to the water sector amounts to about $100 million in six operations. The two ongoing operations are: (i) The Three Towns Water and Sanitation Project financed by the Bank aims to increase the percentage of people with access to safe and reliable water supply as well as public sanitation services to 75 percent of the residents of the cities of Bo, Kenema and Makeni which are important political, economic and cultural centers; and (ii). The Rural Water and Sanitation project covers 5 districts (Koinadugu, Kono, Kambia, Bonthe, and Pujehun).

The Bank has deepened its engagement in the transport Sector in Sierra Leone with the overarching aim of promoting national connectivity and sub-regional integration to enable socio-economic development within the projects’ zones of influence. With three road infrastructure investments in the country spanning from 2009 to date, the Bank has approved $76 million and has leveraged $28.32 million from other donors and has primarily targeted 1.7 million beneficiaries. The completion of the Bank funded Lungi – Port Loko Upgrading project has provided safe, reliable and fast land connectivity to the Lungi International airport.

The Bank, together with other donors and the Government of Sierra Leone, supported the construction of a 50 Megawatt hydroelectric plant near the town of Bumbuna on the Seli River.

The Bank has a long-term commitment to work in partnership with Sierra Leone and the international community towards the realization of its development aspirations as articulated in the Agenda for Prosperity.