Dr Denny Kalyalya, Governor, Bank of Zambia, like his counterparts the world over, is having to stretch monetary policy to its limit and beyond, to counter the effects of the financial crisis and a slowing global economy on Zambia’s domestic economy. The nation’s currency, the Kwacha, has been on the receiving end of fallouts from external headwinds including falling commodity prices and the strengthening dollar.  The Bank of Zambia has had to tighten policy rate to as high as 15.5 percent in November last year when inflation crossed the 14 percent boundary from a reasonable 7.7 percent a month earlier. Since then, Dr Kalyalya has been leading a team of policy experts to  manage the currency and the financial system for economic growth. 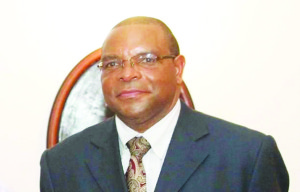 He speaks on the challenges of conducting monetary policy and the significance of Zambia’s hosting of the 2016 annual meetings of the African Development Bank.  Excerpts:

How would you appraise the conduct of monetary policy in the last two years especially following the drop in commodity prices including copper?
Over the past two years, monetary policy has focused on maintaining inflation in line with the Government’s broader economic objectives. Inflation was maintained in single digit throughout this period until the third quarter of 2015 when it started to rise sharply, ending the year at 21.1%.

To address observed threats to the goal of maintaining price and financial system stability, the Bank of Zambia has pursued relatively tight monetary policy. Major challenges monetary policy implementation has faced during this period include demand-pull pressures, arising from the increase in civil service wages in 2013, rising food and energy prices, as well as an expansionary fiscal policy, driven by increased spending on infrastructure. More recently, the depreciation of the Kwacha against the US dollar, largely explained by continuous drop in international commodity prices and reduced supply of foreign exchange, has put pressure on prices of domestic as well as imported commodities, translating into a significant rise in annual inflation. After remaining well anchored between 6% and 8%, annual inflation jumped from 7.7% in September 2015 to 21.1% in December.

On the external front, the terms of trade have largely turned against commodity-exporting economies, such as Zambia. As a result, lower commodity prices have had a negative impact on revenues thereby contributing to higher budget deficits. Deteriorating current accounts have also led to the depreciation of the exchange rates, feeding into higher domestic inflation in most African countries. In addition, lower commodity prices have fed into negative investor sentiments, which have seen the price of Eurobonds for those countries that have entered the capital markets, rise significantly, although there has been some pull-back in prices in recent months. Divergent monetary policies between the United States of America and other advanced economies has also led to volatility in international capital markets and a pull-back of investors from emerging markets.

To meet our price stability objective and to help anchor macroeconomic stability, the Bank of Zambia has had to tighten monetary policy. This was in an effort to restrain excessive credit expansion and to support orderly exchange rate movements. The measures we have taken to tighten monetary policy include raising the policy rate progressively from 9.75% at end-2013 to the current rate of 15.5%, raising the statutory reserve ratio from 5% to 18%. In November 2015, the Bank also restricted access to the Overnight Lending Facility (OLF) Window and raised the OLF rate to 10 percentage points above the Policy Rate from the previous 6 percentage points. In addition, the Bank lifted caps on lending rates to allow for a better functioning of the credit market.

Following these measures we have seen annual inflation peak at 22.9% in February this year and, in April, came down to 21.8%. The tightening in the monetary policy stance is more clearly reflected in the changes in monthly inflation. Monthly inflation, which initially rose from 0.7% in September to a high of 6.2% in October 2015, has since declined sharply to 0.3% in April 2016. With continued relative stability in the exchange rate and fiscal consolidation efforts of the Government, we anticipate that annual inflation will fall back into single digit by the end of the year and into 2017.

Central banks now intervene directly in other areas of their economies outside their core function. Do you subscribe to this norm?
It is true that central banks, particularly in developing economies, have roles beyond price and financial system stability. In Zambia, for example, the central bank has been instrumental in the development of the payment system, including the increasing role of mobile technology in the financial sector. We are also significantly involved in trying to progress financial inclusion. These are all key developmental roles that are important for both financial system stability and the efficacy of monetary policy, and ultimately, for the promotion of inclusive growth.

I believe that the traditional role of central banks in maintaining price and financial system stability remains central in addressing the current challenges that we face as central bankers. I would therefore argue that for many developing countries, this core mandate needs to be maintained given persistent fragility of the macroeconomic environment.

How significant is the hosting of the 2016 Lusaka AfDB Annual Meetings to the Zambian financial sector?
The fact that Zambia is hosting the AfDB Annual Meetings is very significant, not just for the financial sector, but for the economy as a whole. The theme of the 2016 AfDB Annual Meetings —Energy and Climate Change — is particularly relevant to Zambia. These two issues are among the most urgent external and domestic shocks that the Zambian economy is currently facing. We therefore welcome the African Development Bank’s focus on energy and climate change and the clear and appropriately ambitious agenda of our new AfDB President, encapsulated in the High 5s, namely: Light and Power Africa, Feed Africa, Industrialise Africa, Integrate Africa, and Improve the quality of life for the people of Africa. In Zambia, we have identified the agriculture and energy sectors as having a central role in the diversification of our economy in terms of both export earnings and local value addition, and it is my hope and expectation that the outcome of these deliberations will provide practical and specific recommendations aimed at addressing the critical challenges that we face.

The financial sector will have an important role to play if we are to achieve our objectives and my hope is that the discussions on the opportunities available and the way forward will serve as an important platform to transform, at the very least, the agriculture and energy sectors in Zambia.

With regards to areas offering great opportunities, the energy and agriculture sectors, which can become strong export sectors that contribute to the diversification of our export base, are an important starting point. Beyond these sectors, there are SMEs, tourism and manufacturing sectors.
Although Zambia has made progress in improving access to and use of financial services, use of formal financial services remains very low. Improving the access to and use of formal financial services therefore offers opportunities for investment in the financial sector. This is particularly important as Zambia seeks to become a prosperous middle income country by the year 2030.