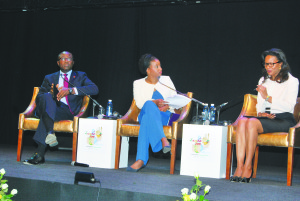 In banking as in any other business, everything boils down to the good old bottom line. It’s serious business. Little wonder the African Development Bank sets much store by its financial presentation.

Presenting the highlights of the Bank’s income statement, Vice President, Finance, Charles Boamah and Treasurer, Hassatou N’sele teamed up to untangle the thicket of figures and arcane stats in the beautiful hand-out issued to delegates at the end of the sumptuous dinner.

True, the Bank is a development institution that prioritises its impact on the economies of its client countries over profitability; management nonetheless takes seriously its duty to align operations with the dictates of sound prudential guidelines. Boamah explained that against all odds, the Bank was adjudged to have the lowest cost-to-income ratio among its peers by the rating agency, Standard and Poor’s.

In spite of the well-known global negative operating environment, the AfDB has been able to post what is on balance, positive income for the year under review. Boamah revealed that the Bank was able to generate allocable income of $190 million, out of which it retired $58 million to reserves; at the AfDB, reserves always have first claim on earnings. The balance of $132 million has been shunted into development initiatives, which are the raison d’etre of the institution.

Overall, the Bank actually put more resources to work in Africa under difficult conditions than it has been doing. The Bank was able to plough a total $8.8 billion into its interventions in 2015, representing 20 percent increase over the previous year, This, perhaps, adversely affected net income for the year, quite apart from the well-known effect of the global economic slowdown

Other reasons have been adduced for the less than stellar performance. The Bank’s spokespersons revealed that non-sovereign operations generated a proportionally larger share of revenue but higher profit margins were counter-balanced by slightly higher provision rates. Additionally, the pervading low interest rate environment meant that the Bank had to contend with lower returns on its lending activities.

The good news, however, is that with the adoption of the High 5s, the new agenda for achieving the Ten Year Strategy, the Bank is in for even more speed in the coming years. “President Akinwumi Adesina has livened up the Bank with a new shot of confidence and can-do spirit,” says Tim Turner, Vice President/Chief Risk Officer, AfDB.

“The single most important financial innovation of Dr Adesina so far is the MDB express exchange transferred risk with the World Bank and Inter-America Development Bank, which gained $10 billion new lending capacity for Africa,” he adds.

At AfDB, the name of the game is “resources and more resources”, given the enormity of the funding gap Africa must bridge to achieve the goals articulated by the High 5s. Large-scale partnerships are already in gear to crowd in more resources for the continent’s benefit. Through the Enhanced Private Sector Assistance for Africa, Japan is making available $3 billion while China is chipping in $2 billion through Africa Growing Together Fund. Besides, the Bank is itself pushing its own bonds hard, and has gotten 13 African countries to invest in them.

For the AfDB, the most reassuring news is shareholders’ continued support, openly expressed by none other than the Chairperson of the African Union, President Idriss Deby at the Lusaka 2016 Opening Ceremony, Tuesday, May 24.