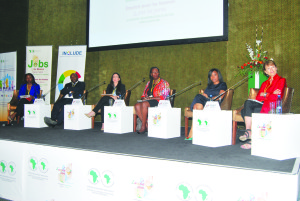 Women and youths hold the key to successful agricultural transformation in Africa that would feed the continent’s population. But this could not happen until the challenges that impede their participation in the agricultural value chain are addressed.  This is the position of a panel of discussants on “Jobs for Women and Young People — the Transformative Potential of Agriculture,” at the ongoing 2016 Annual Meetings of the African Development Bank (AfDB) in Lusaka, Zambia.

Geraldine J. Fraser-Moleketi, Senior Vice president of AfDB, said African women are faced with systematic discrimination across the continent in terms of land ownership and unequal access to finance and other productive assets. “This insidious conspiracy is supressing women’s opportunities to benefit from agriculture value chains. But closing the gender gap can increase output to 20 to 30 percent with a widespread benefits for households and communities,” Fraser-Moleketi said.

She added that the youths segment also face barriers to realising their economic potential as about 146 million youths in the continent are vulnerably employed while another 79 million are inactive and 10 to 20 million are unemployable and discouraged.

Ada Osakwe, chief executive, Agrolay Ventures and Jacqueline Novogratz, CEO, Acumen believe that changing the narrative that made agriculture to be perceived as drudgery engagement with a new one that showcase the potential that lie within the agricultural value chain would lure youths to take part in agriculture.