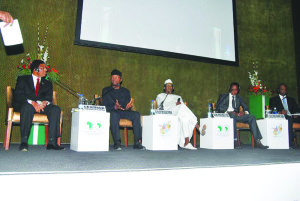 African leaders have called for a collaborative approach to tackle the devastating impact of climate change ravagingthe continent. At a roundtable at the ongoing annual meetings of the AfDB, leaders of Zambia, Chad, Nigeria, Mozambique,Tanzania and Namibia acknowledge the energy crisis bedevilling the continent’s development while insisting on prioritizing development.

President Edgar Lungu of Zambia said he was mindful of the concerns of Climate Change, adding that “Africa’s problem was not switching from fossil fuel to cleaner sources of energy but that of access to electricity”.

He said his government is committed to improving rural electrification but has been facing the challenge of low rainfall in the last two years which has led to low water level at the Kariba Dam. Zambia, he added, depends on about 80% of electricity production via hydro sources.

For President Idris Derby of Chad, addressing the energy crisis will entail collaborative approach to regional projects such as the moribund Grand Inga Dam. In this regard, the AfDB, he said, will be a valued partner that will provide financing and expert advisory services. “We need to use our potential to take action to address the energy challenges. If we do this, we will be able to implement realistic projects that will enable us light up Africa,” he submitted.

Nigeria’s Vice President Prof. Yemi Osinbajo, said Africa will have to harness all energy sources including fossil fuel, adding that “we have to prioritize development”.

Expressing concern for environmental consequences of dependence on fossil fuel, Prof. Osinbajo said “Africa will need to find a way to balance the demand for energy and environmental concerns”.

If the West is so desirous of tackling Climate Change, the Nigerian Vice President said, they should provide the finance, technology and expertise needed for clean energy.

Tanzania’s Prime Minister Kasim Majaliwa called for political will that attracts investment to the energy sector. He said Tanzania is revisiting its energy policies and institutional set-ups as well as regulatory framework that will aid investment in the energy sector, adding “we have electrified 52% of our rural areas”.

Prime Minister of Mozambique, Carlos Agostinho Do Rosario, called for an electricity pool that would allow producers to sell to buyers. A balanced tariff regime will aid such a pool to operate optimally.

Namibia’s Finance Minister Calle Shlettwein who represented the Namibian President said financing development was very expensive. He said Namibia spends a third more to produce power than other Southern African countries. He called for a stronger move against illicitfinancial flows which took out more resources from Africa than donor resources brought in.