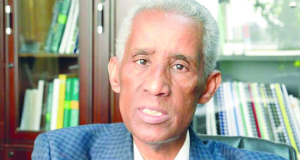 Recent reports on the continent’s development dwell on the heavy damage climate change has caused to the agricultural sector and the attendant under-nutrition of Africa’s growing population. The United Nations Children’s Emergency Fund (UNICEF) estimates the annual cost of under-nutrition in Sub-Saharan Africa at US $25 billion.

Already, experts have predicted a drastic decline in food production and farmers’ incomes across the continent as global warming takes its toll on agriculture. A new study by Science Direct, a global scientific body with over 3000 peer-reviewed scholarly articles, predicts that higher temperatures will cause annual rainfall to decline by 1.1 percent and would inflict more damage on rain-fed agriculture in Sub-Saharan Africa.

“The expected changes in crop yields indicate that there is robust support for probable yield decline, which will in turn result in lowered farm income,” the report said. It also predicts that agriculture commodities prices will rise 3 to 7 percent by mid-century in most countries in the region due to increased scarcity.

According to the study, Zimbabwe, which has 70 percent of its population dependent on agriculture will experience significant decline in the consumption of almost everything, from cereal to fats, protein and vitamins, putting many people at risk of diseases like anaemia and malnutrition among children.

Concerned that about 58 million children in Africa under the age of five are reportedly ‘too short for their age’; and 14 million weighing ‘too little for their height’, the African Development Bank (AfDB) has elevated the nutritional deficiency challenge as a priority project. The Bank is set to launch a new strategy to ‘Feed Africa’ on May 23 on the sidelines of this year’s Annual Meetings. The programme is geared towards turning Africa, a net food-importing continent into a self-sufficient food exporter within the next decade (10 years).

AfDB President Dr Akinwumi Adesina is now championing the idea of financing the fight against malnutrition and issuing nutrition social bonds. The Bank’s President recently harped on the urgent need for Africa to scale up its use of bio-fortified foods, whose raw materials are plentiful across Africa. Through nutritional security, Adesina says, “Africa will manage its own development” properly.

There are hopes that the launch of Pan-African Nutritional Security Plan on the sidelines of the Annual Meetings, plus other initiatives being championed by NGOs such as the Bill and Melinda Gates Foundation, would give the campaign the requisite fillip.

Interestingly, Ethiopia, one of the numerous African countries adversely affected by the latest El Nino-induced drought has emerged as a success story of how to address the crisis. The country was insulated from the devastating impact of the famine so far due to government’s climate resilient, carbon-neutral development programme.

Efforts spearheaded by Professor Tekalign Mamo to reduce the country’s severe land degradation, soil acidity and nutrient deficiencies that hinder crop growth have played a critical role in Ethiopia’s agricultural renaissance. Between 2000 and 2014, grain production tripled, bolstering progress towards poverty and hunger reduction goals and earning the country recognition as one of the fastest growing economies in the world.