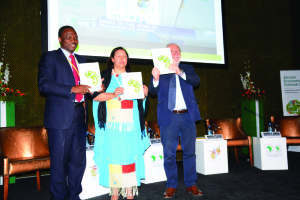 Africa can achieve rapid development if cities are primed to be engines of structural transformation, according to panellists at the launch of African Economic Outlook. Launching the report, Dr Frannie Leautier, Senior Vice President of the AfDB, says the Outlook findings are linked to the Bank’s High 5s, noting that “cities are the platforms on which industrialisation takes place because of the presence of cluster economies”.

Explaining Africa’s growth trajectory, Abebe Shimeles, AfDB Acting Director of Development Research says the “Africa rising” narrative is now being questioned following the drop in the price of commodities in the international market, which has reversed the macroeconomic gains many economies in Africa have made in the last few years.

The narrative, however, remains valid.  Continental growth, Abebe projects, will rebound in 2017 to 4.5 percent from 3.7 percent in 2016, driven by East and West Africa which are doing well with 2016 rates of 6.4 percent and 4.3 percent respectively.

Aisa Kirabo, Deputy Executive Director, UN-Habitat decries the character of urbanization in Africa. The growth of slums is not just due to poverty but lack of planning, she says, while blaming insufficient focus on the budgetary process in planning. She advocates “good governance in land management, in terms of inclusiveness and efficient land allocation”.

Abdoulie Janneh, Executive Director of the Mo Ibrahim Foundation, calls for visionary leadership towards planning cities and in the efficient provision of basic services.

Mamadou Biteye, Managing Director of the Rockefeller Foundation calls for cities to appoint Chief Resilient Officers that would make cities resilient to pressures on infrastructure.

African cities can foster transformation, in the view of Mario Pezzini, Director of the OECD Development Centre, by reforming labour and product markets to make food supply chain more efficient and by developing networks that could integrate and power Africa.