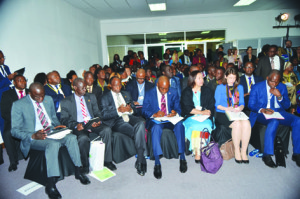 The world is used to calls for leaders and countries to scale up investments in agriculture to ensure food security. At the ongoing AfDB meetings, panelists and delegates are extending the campaign one step further to nutrition security, which goes beyond the availability of food.

African leaders and policymakers, participants agree, have to place more emphasis on the quality and nutritional value of the food their people ingest to produce a healthy, strong, creatively brilliant population that can survive in today’s highly competitive, globalized world.

In his opening remarks at the “Call for Action: Achieving Nutrition Security” seminar,  yesterday,  President,  African Development Bank (AfDB) Group, Dr. Akinwumi Adesina described the incidence of malnutrition in Africa as appalling and appealed for urgent, holistic action to tackle the scourge.

“Africa accounts for 20 of the 24 countries with stunting growth rates over 40 percent. 22 of the 23 countries that collectively accounts for 90 percent of the world’s stunting are in Africa. About 58 million children in Africa under the age of five are too short for their age (that is, stunted) while about 14 million weigh too little for their heights, which means they are underweight; 10 million are overweight,” he lamented.

Declaring “access to food in the right quantity and the right quality a fundamental human right”, Dr Adesina believes investment in nutrition should now assume greater priority than even infrastructure because malnutrition and under-nutrition have serious economic consequences “in terms of low labour productivity and low economic earning potential, posing huge loses to the economies”.

The greatest contributor to economic progress is not physical infrastructure but brain power, he argued.  Malnourished kids, he said, perform badly in school due to a reduction in cognitive capacities. Underweight kids below the age of five are, in addition, susceptible to diseases and face higher risk of dying young.

Former United Nations Secretary General and the Chairman of African Progress Panel, Prof. Koffi Annan threw his weight behind the AfDB President’s submission by identifying malnutrition as “a major barrier to development across many African countries”. In his opinion, poor nutrition casts a long shadow over an entire generation, denying children, communities and nations the chance of reaching their full potential.
Mr Annan recommends not just an increase in agriculture but production of nutritional quality foods. “Africa is the only continent which fails to produce enough food to feed its own citizens. It’s not just about the amount of food we grow but also the type of food we eat. We need agriculture to be nutrition smart,” he stressed.

Former Ghanaian President and Co-Chair of the Global Panel on Agriculture and Food System, Dr John Kufour dwelt on the need for the political will to fight the nutrition scourge at the highest political level across Africa. He gave this as the reason for constituting the African Leaders for Nutrition (ALN) forum, which hopes to encourage   presidents, heads of state and policymakers to drive the project.

The role of business in the nutrition awareness campaign was taken up by Zouera Youssoufou, CEO, Dangote Foundation.  Youssoufou revealed that Dangote products are nutritionally fortified as part of the company’s goal of contributing to the healthy growth of African consumers of its numerous products. “Even though the technology for fortifying products are very expensive, we believe the cost of malnutrition is much higher; so, we consider it as a worthwhile investment and we encourage other businesses to follow suit,” she said.

The robust debate at the seminar, many participants believe, will spur upcoming forums on development in Africa to shift nutrition security to the front burner among the plethora of issues the continent has to grapple with.