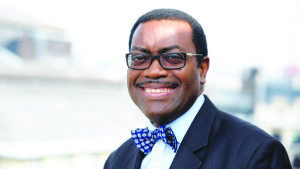 AS Zambia begins the historic ritual of hosting the 2016 AfDB annual meetings, delegates, Zambians and even Bank staff are full of expectations for successful meetings.

Many are happy to know that this summit is about the only forum on the continent where top multilateral institutions and countries make themselves available in temporary offices at the venue for interaction with all participants. Traditionally, the AfDB meetings have evolved to be respected as a very credible one-stop shop or marketing arena for all those who wish to do business with Africa, and in Africa.

Describing the Annual Meetings as the Bank’s “window on the world”, Bank President Dr Akinwumi Adesina will unveil the new agenda for Africa’s economic transformation at the meetings. Focus will be on priority areas termed the High 5s, which can help to create as many as 25 million jobs across Africa in the next decade.

The meetings’ central theme — Energy and Climate Change — are top on the priority list, with energy being arguably the single most important. Africa’s energy deficit is so severe that about 650 million people (out of a total population of about 1 billion) are said to have no access to electricity. Stacked up, one on top of the other, the High 5s are: Light Up and Power Africa; Feed Africa; Industrialize Africa; Integrate Africa; and Improve the quality of life for the people of Africa. These are the new Bank President’s vision for Africa.

Dr Adesina’s approach is simple and direct. “All of them (the High 5s) need to be debated and owned,” he says, “as much by governments, as by business, civil society, the press and the people of Africa”. He would like to see “nothing less than the social and economic transformation of Africa” by unleashing the continent’s massive potential. The Bank chief is encouraged by Africa’s resilience on an average growth rate of 4%, which is higher than the global average despite prevailing “economic headwinds”.

Later in the day, attention moves to the seminar on Jobs for Women and Young People. The day’s events close with the traditional welcome cocktail party to put everyone in the mood for fellowship and the jaw-jawing mood to come in the ensuing four days of serious deliberations.

Day 2, Tuesday 24th, is for the Formal Opening Ceremony event. It is also the day for opening up discussions on the Annual Meetings’ main theme of Universal Access to Energy in Africa by 2025. Same day, such dignitaries as Zambia President Edgar Lungu; Nigeria’s Vice President Yemi Osinbajo; Ethiopia Prime Minister Hailemariam Desalegn; Guinean President Alpha Conde; and Chadian President Idris Deby will give their homespun analysis on energy and climate change at the African Leaders Roundtable on Energy and Climate Change.

The second half of the main theme — Climate Change — gets the attention of delegates on Wednesday 25th at another high-level seminar, Climate Change – Beating the Odds, after the grand event of Financial Presentation, which would showcase the financial strength of the Bank. A major side event of the day, if not the entire meetings, is the star-studded development clinic on “Africa’s Energy: What’s the New Deal?”

The fourth day of deliberations allows delegates to continue on the theme of energy and climate change with enough room to tackle other important issues such as Manufacturing Strategies and Illicit Financing. The day winds down with the biggest social event of Cultural Night, where all participants get a taste of Zambia’s much-talked about hospitality.
Day 5 winds up the Lusaka 2016 meetings, but not before civil societies get the chance to review the High 5s agenda, what it all means and its implementation strategy.

The Lusaka 2016 AfDB meetings promise to be another resounding success. It is expected to secure the buy-in of Africa-focused global audience for the new AfDB President’s agenda for Africa. It also gives Zambia the chance to showcase its huge tourism potential.